On 24 January 2017, the The National Liaison Centre for the International Health Regulations of Brazil (RSI for its acronym in Portuguese), (RSI,) which is an extension of WHO, provided updated information to PAHO/WHO on the country's yellow fever situation; the information that was provided showed that the geographic distribution of confirmed cases is expanding and that it not only includes the state of Minas Gerais, but also the states of Espírito Santo, São Paulo, and Rio Grande do Norte. In addition, cases are being investigated in the states of Bahía, Goias and Tocantis. According to epidemiological report number 29 from Brazil's Ministry of Health, 1,431 suspected cases of yellow fever have been reported 1 December, 2016 to 10 March 2017; of these cases 379 (26.50 per cent) were confirmed, 125 (8.73 per cent) were ruled out and 927 (64.77 per cent) are still under investigation. The total number of suspected and confirmed cases is the highest that has been registered in the country since 2000 according to the WHO, and the vector poses a risk of spreading the disease to other parts of Brazil and other neighbouring countries in South America. (IFRC, 21 Mar 2017)
According to the last epidemiological report from the Ministry of Health dated 31 May 2017, the distribution of cases and deaths have doubled. The report further states that 3,240 suspected cases of wild-type yellow fever were reported, of which 792 were confirmed (24.5 per cent), 519 are still being studied (16 per cent), and 1,929 (59.5 per cent) were ruled out (see chart), with a fatality rate of 34.5 per cent. In total, 83.1 per cent of the cases involved men between 16 and 65 years of age. (IFRC, 17 Jun 2017)
According to the probable site of infection, suspected cases correspond to 407 municipalities, while the confirmed cases were distributed among 130 municipalities in 8 states (Espírito Santo, Goiás, Mato Grosso, Minas Gerais, Pará, Rio de Janeiro, São Paulo, and Tocantins) and the Federal District. With regard to the confirmed fatal cases and their probable site of infection, one corresponds to the Federal District, 85 to Espírito Santo, one to Goiás, one to Matto Grosso, 165 to Minas Gerais, four to Pará, 7 to Rio de Janeiro, and 10 to São Paulo. In the states with more than 5 confirmed deaths, the CFR among confirmed cases is 50% in São Paulo, 41% in Rio de Janeiro, 34% in Minas Gerais, and 33% in Espírito Santo. (WHO/PAHO,10 Jul 2017)
On 3 July, the Ministry of Health stated that the death rate had risen by one person and five more confirmed cases.1 Of the 3,245 cases notified, 1,929 were ruled out and 519 cases remain under investigation. The number of cases has stabilized since the end of the summer which also experienced rains. It has meant a significant decrease in the Aedes aegypti mosquito population. This mosquito in addition to transmitting yellow fever also transmits Zika, dengue and chikungunya. (IFRC,12 Jul 2017) 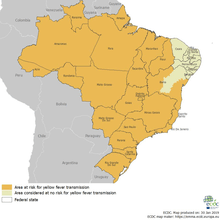 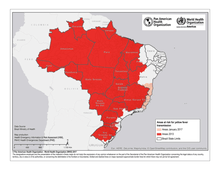