Since 5 February, 567 cumulative cases of cholera have been reported in Zambia; 481 in Lusaka City and 1 in Rufunsa district in Lusaka Province; 23 in Chibombo in Central province, 61 in Nsama in Northern Province and 1 in Ndola in Copperbelt Province. One hundred and fifty six (156) of these cases have been laboratory confirmed as cholera.

As of the 30 March 2016, there were 31 cases under treatment, 28 in Lusaka and 3 in Nsama district. Six cholera related deaths have been reported since the onset of the outbreak, three of which were children... The government continues to lead the response of the current Cholera outbreak at national, provincial and district level. Districts have been put under high alert with ongoing cholera prevention messages being sent out using radio, interpersonal communication, print media and other communication media.

UNICEF has continued to provide support to the national Cholera response, focus will now be on Nsama district which has reported high numbers of cases. Nsama is a rural district with limited resources (human and financial) to mount a robust response, thus has a high potential for loss of life if not supported adequately. (UNICEF, 1 Apr 2016)

The largest cholera vaccination campaign ever undertaken has just commenced in Zambia’s capital, Lusaka. Over half a million people are planned to receive the oral cholera vaccine in an effort to curb the outbreak that began in February in the city’s overcrowded township areas. As of 7 April, a total of 664 cases and 12 deaths had been reported in Lusaka.

MSF is working in close collaboration with the Zambian Ministry of Health and WHO to carry out the vaccination campaign, which is expected to last for two weeks....In Lusaka, around 1.2 million people live in overcrowded ‘informal settlements’ that are at risk of cholera each rainy season. This year, the rainy season was delayed, causing boreholes to dry up and forcing the population to use unprotected shallow wells. When the rains came, floodwaters mixed with overfull pit latrines, creating rivers and lakes of contaminated water that people were forced to wade through. This has created the ideal environment for a large-scale cholera outbreak. (MSF, 9 Apr 2016)

Since 5 February 2016, 1,179 cumulative cases of cholera have been reported in Zambia (953 in Lusaka city and 8 in Rufunsa district in Lusaka Province; 23 in Chibombo and 2 in Kabwe in Central Province, 66 in Nsama in Northern Province, 28 in Ndola in Copperbelt Province and 50 in Mazabuka and 49 in Monze districts in the Southern Province). The cases in both districts of the Southern Province started at the end of Epidemiological Week 16. One hundred and ninety-two (192) of the cases reported have been laboratory confirmed as cholera. Thirty one (31) cholera related deaths have been reported since the onset of the outbreak, of which eight are children. As of 2 May 2016, there were 42 cases of cholera under treatment (15 in Lusaka Province, 3 in Copperbelt Province and 24 in Southern province). (UNICEF, 9 May 2016) 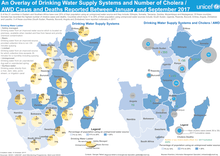 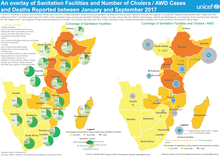