The Ministry of Health has declared a cholera outbreak in Iraq with 15 confirmed cases in two governorates as of 15 September. Ten cases originated from Najaf and five cases from Baghdad. All cases are reported to be stable and treatment has been provided. The number of unconfirmed suspected cases is increasing. The disease outbreak comes after an uptick in diarrheal cases above the normal threshold was noted in some southern and central governorates in the past weeks. To respond to the unfolding situation, the Ministry of Health and partners have deployed to the affected areas. (OCHA, 15 Sep 2015)

As of 6 October, there have been 1039 confirmed cases of cholera reported in 13 governorates. Ongoing conflict has taken a toll on health services – more than 170 health facilities are non-functional. While a critical funding shortfall disrupted key health projects during July and August, careful reprogramming and an injection of funding saved some 100 health projects from being completely shut down. However, 46 critical WHO and Health Cluster projects are at risk unless further funding is received by the end of the year. (WHO, 13 Oct 2015)

As of end October, 2,171 laboratory-tested cases had been confirmed in 15 of the country’s 18 governorates. WHO informed that pilgrimages in October and December posed an additional transmission risk. (ACAPS, 3 Nov 2015)

As of 22 November, a total of 2,810 laboratory-confirmed cases of Vibrio cholerae 01 Inaba had been confirmed at the Central Public Health Laboratory in Baghdad, and only 2 deaths related to cholera were reported. These cases were reported from 17 Governorates of the country, with the highest number of cases in Baghdad (940) and Babylon (675). (WHO, 26 Nov 2015)

A Cholera Taskforce has been established and responded to this outbreak through Cholera Command and Control Centre (C4) under the leadership of the Ministry of Health. No more cholera cases have been reported from Iraq since December 6, 2015 and the C4 declared the containment of the outbreak. (Gov't of Iraq, WHO, 13 Dec 2015) 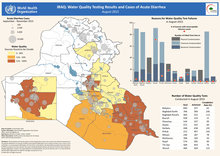 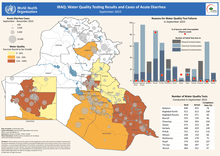 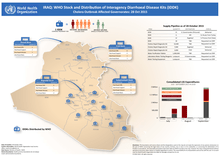