Starting in 2000, Yemen faced repeated outbreaks of severe dengue. In 2015, an upsurge was reported after over 1 million people had been internally displaced and health systems had been disrupted. More than 3,000 suspected cases and three deaths were recorded between 27 Mar and 4 Jun. (WHO, 12 Jun 2015)

Despite incomplete levels of reporting from Taiz, an extreme spike in cases of dengue fever has been recorded in the governorate in the past 2 weeks from 145 suspected cases at the start of August to 421 by 25 August 2015. With the ongoing insecurity and mass displacement of thousands of people, it is likely that the situation will deteriorate in the coming days, placing over 3.2 million people at additional risk. (WHO, 27 Aug 2015) 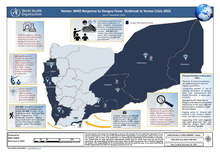 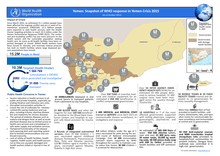 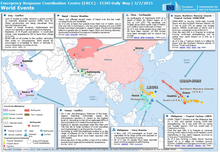