Starting in early February 2014, measles outbreaks were confirmed in several regions of Somalia (OCHA, 20 May 2014). In March and April, there were over 1,350 suspected cases – four times the number seen during the same period in 2013. Nearly 1,000 cases were reported in May alone. (WHO/UNICEF, 10 Jun 2014) By June, the cumulative number of cases stood at around 4,000. On 14 Jul, the UN Central Emergency Response Fund (CERF) allocated US$1.4 million for an emergency campaign to vaccinate 520,000 children under 5 years in the worst affected areas of Banadir, Lower Juba and Puntland. (OCHA, 14 Jul 2014) By September, more than 7,700 suspected measles cases had been reported and vaccination campaigns were ongoing (UNICEF, 30 Sep 2014). By November, the number of cases had increased to 9,000, more than twice the number of cases in the same period in 2013. (OCHA, 24 Nov 2014)

A measles outbreak has been reported in Buhodle in Togdheer region by the Ministry of Health. Some 29 cases of measles were confirmed in rural villages around Buhodle, according to the local authorities. These include 18 cases among children under age 5. Local officials also reported that the cases are spreading in the area.

Unconfirmed reports indicate that most of the affected people had not been vaccinated. A number of nomadic pastoralist families affected by the drought in parts of Puntland and Somaliland have recently moved into these villages, according to authorities.

In 2015, some 7,500 suspected cases of measles were detected mostly among children under age 5 in southern and central Somalia. Emergency vaccination against measles remains a priority for 2016.

In November 2015, humanitarian partners in collaboration with the Federal Government launched a measles campaign targeting nearly 4 million children under age 10 in Somalia. Over 3.5 million children were vaccinated against measles since November 2015. This represents an administrative coverage of 90 per cent in accessible districts of Somalia. Plans are underway to begin an immunization campaign in Bakool region following the recent suspected cases of measles in the area.[(OCHA, 23 Mar 2016)] 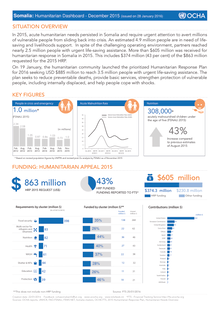 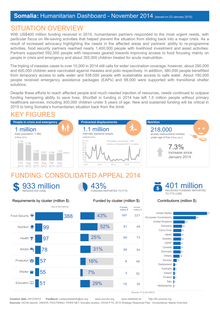 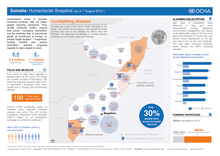