El Salvador is the first country in Central America with a chikungunya outbreak. Several cases appeared in early June 2014 in the municipality of Axutuxtepeque in the Department of San Salvador. Dengue cases have also increased in the country in recent months. On 18 Jun, the Ministry of Health, through the Directorate-General for Civil Protection, established a stratified Yellow Alert due to the growing number of cases of chikungunya and dengue fever in the country. By July, 1,300 suspected chikungunya cases had been reported, distributed over six departments and 20 municipalities. Up to epidemiological week 25, 15,225 suspected cases of dengue had been recorded, of which 5,299 were confirmed positive, 93 of them severe. (IFRC, 3 Jul 2014)

By mid-September, almost 30,000 suspected cases of chikungunya had been reported and the virus had spread to all departments and 90 per cent of municipalities in the country. At the same time, more than 41,500 suspected cases of dengue fever had been reported, which is double the amount of cases reported over the same period in 2013. (IFRC, 24 Oct 2014)

By 19 Nov, the number of new cases for both chikungunya and dengue was declining (La Prensa Gráfica, 19 Nov 2014). 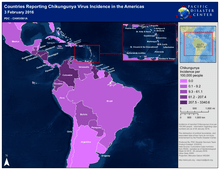 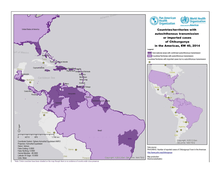