In October 2013, wild poliovirus type 1 was confirmed in Cameroon for the first time since 2009. Two patients in the West Region developed paralysis on 1 Oct and 19 Oct. (WHO, 21 Nov 2013) Three additional cases were reported with onset of paralysis on 6, 25, and 31 Jan 2014 from three new regions (North West, Adamaoua, and Centre), confirming continued transmission and geographic expansion of infected areas. As of 17 Mar, a total of seven cases had been reported, with onset of paralysis ranging from 1 Oct 2013 to 31 Jan 2014. The confirmation of new cases has resulted in planning additional emergency outbreak response activities, including converting a subnational immunization campaign to a full nationwide activity in April 2014, and implementing nationwide campaigns in May and June 2014. Due to continued poliovirus circulation, gaps in surveillance, and influx of vulnerable refugee populations from Central African Republic, WHO elevated the risk assessment of international spread of polio from Cameroon to very high. (WHO, 17 Mar 2014) At the beginning of August, two new cases were reported in Est province among refugees from Central African Republic. Efforts were ongoing to improve immunity levels and surveillance sensitivity in neighbouring CAR. (Global Polio Eradication Initiative, 13 Aug 2014) As of 14 Jan 2015, the number of polio cases reported from Cameroon in 2014 stood at five, and more than six months had passed since the most recent case of was detected in Cameroon on 9 Jul 2014 (Global Polio Eradication Initiative, 14 Jan 2015). 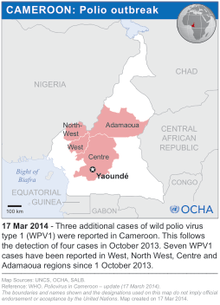