On 23 Oct 2012, the municipality of Comé (Department of Mono) in the south west of Benin reported the first confirmed cases of cholera. Shortly after, the local authorities issued an official declaration of the outbreak. A total of 65 cases were reported throughout November 2012. Through the joint efforts by the Beninese government, local authorities and the Red Cross Society of Benin the epidemic was contained and was declared to be over in December 2012. (IFRC, 13 Feb 2013) 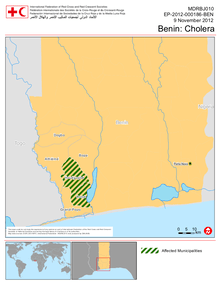