An outbreak of Ebola haemorrhagic fever in Kibaale district in western Uganda killed 17 people in July and August 2012. A total of 24 probable and confirmed cases were recorded, of which 11 were laboratory confirmed by the Uganda Virus Research Institute in Entebbe. On 4 Oct, the government declared the end of the outbreak. (WHO, 4 Oct 2012)

In November 2012, a second outbreak struck the country. Uganda's Ministry of Health said a fresh outbreak of Ebola haemorrhagic fever is straining an already over-stretched health system. (IRIN, 15 Nov 2012) As of 28 Nov 2012, seven cases (six confirmed, one probable), including four deaths, were reported in Luweero and Kampala districts (WHO, 30 Nov 2012). According to WHO, no new Ebola cases have been reported since 18 Dec. The last confirmed cases were discharged on 26 Nov and 5 Dec. (OCHA, 15 Jan 2013) Uganda’s Ministry of Health and WHO declared Luwero district Ebola-free on 16 Jan 2013 (IFRC, 5 Feb 2013).

A total of 647,536 persons were reached by the response and prevention activities performed by the URCS during the DREF operation. Despite the impressive number of persons reached, less than half of the planned beneficiaries initially planned were reached by the activities. This is largely due to a reduced number of radio spots and health messages delivered over local media and broadcasting by URCS, as other partners stepped in to cover this activity. (IFRC Final Report, 2 May 2013) 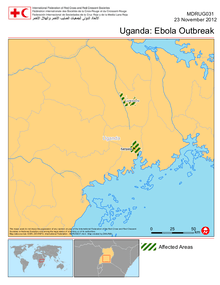 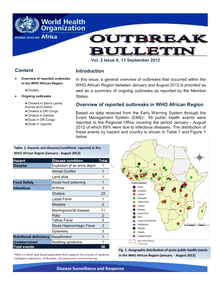 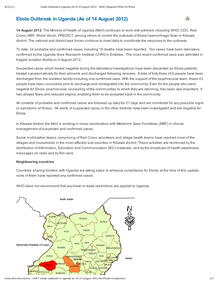