As of 18 Nov 2011, three regions (Upper west, Northern and Greater Accra) were affected by yellow fever, with eight cases and one recorded death (IFRC, 6 Dec 2011).

On 20 Dec 2011, the Ministry of Health of Ghana declared a yellow fever outbreak in the country. The cases were recorded in three districts, namely Builsa and Kassena-Nankana-West in the Upper East Region and Kitampo-South in the Brong Ahafo Region located in the mid-western part of the country. The disease spread over to eight regions out of 10. A total of three laboratory-confirmed cases, including seven deaths had been reported by yellow fever surveillance, with the clinical syndrome of fever and jaundice. By March 2012, preventive vaccination had helped to reduce the number of new cases and deaths. (IFRC, 4 Jul 2012) 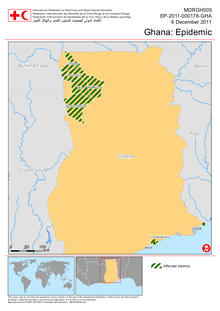