An Ebola haemorrhagic fever epidemic has been reported in Luwero District of Uganda. One death so far has been reported with two suspected cases in the isolation unit at Bombo military hospital since the outbreak was confirmed on 13 May 2011 by the Ugandan Ministry of Health (MoH). (IFRC, 20 May 2011)

CHF 133,744 was allocated from the IFRC’s Disaster Relief Emergency Fund (DREF) on 18 May, 2011 to support the national society in delivering assistance to some 1,731,900 beneficiaries, and to replenish disaster preparedness stocks. This operation was implemented for 3 months starting from 18 May 2011 and was completed on 19 August 2011. A joint final evaluation meeting was conducted by the Ministry of Health (MoH) on 1-2 September 2011. (IFRC Final Report, 29 Nov 2011) 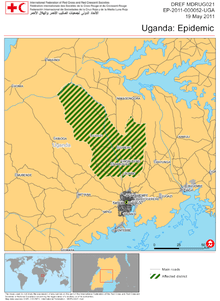