Between September and November 2009, Cape Verde experienced its first epidemic of dengue fever. More than 13,000 suspected dengue cases were reported by the Ministry of Public Health. More than 3,000 cases were confirmed and about 68 were suspected of dengue haemorrhagic including 6 deaths. A sharp increase was noted at the beginning of November, 80% noted in Praia in the island of Santiago. Other islands such as Brava, Fogo and Maio, were also affected by the outbreak. The Red Cross' response included social mobilization, vector control and enhanced management of clinical cases in hospitals and health centres.The Ministry of Health and the WHO office in Praia also responded by implementing a rapid monitoring system. Most cases were reported in Praia, Santiago, where the population density is highest therefore in order to avoid the rapid spread of the virus, contingency planning and preventive measures were set up. The Cape Verde Red Cross assisted the Department of Public Health by mobilizing its volunteers in community-level awareness, as well as sanitation activities and distribution. By coordinating with health authorities and partners in the country, all actors involved were able to respond effectively to the epidemic. (IFRC, 01 Oct 2010) 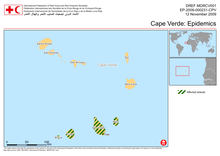 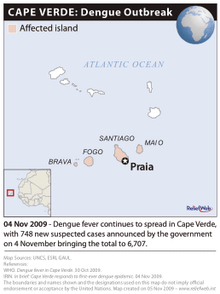