The latest reports from the International Research Institute (IRI) for Climate Change and Society indicate that there are high probabilities of the occurrence of an El Niño event in 2018/19. This is forecast to trigger below average rains in most of the country until April next year, bearing a high risk for the 2019 main Maha paddy output as well as the early development stages of the secondary Yala paddy season, to be sown in April and May. In view of the enhanced likelihood of the occurrence of an El Niño event, the food security situation may deteriorate in 2019 in case of failure of the Maha and Yala crops. (FAO, 11 Dec 2018)

According to the climate impact analysis, countrywide reservoirs were filled to 50 percent of their total capacity in May 2019, but water levels had fallen to 36 percent by mid-June due to evapotranspiration in the warm weather conditions. Forecasts predict that rainfall remain below normal and temperatures will be above normal in July. This will add to the scarcity of drinking water and limit agriculture production. (WFP, 30 Jun 2019)

Many areas in the north and eastern parts of the country are facing varying levels of drought, from ‘drought watch’ up to ‘extreme drought conditions.’ As of 18 August, more than 682,000 people have been affected by drought. (OCHA, 19 Aug 2019)

Sri Lanka is in the midst of a long spell of dry weather again following below-average rains in the first half of 2019. The country was recovering from a severe drought in 2016-17, affecting over a million people. Currently, dry and moderate drought conditions are in pockets of North, North-Western, North-Central, Uva and Eastern Provinces. According to the joint bulletin by the World Food Programme and International Water Management Institute in August, major reservoirs are low at 19% of their capacities, compared with 33% at the same time last year. (ECHO, 20 Aug 2019) 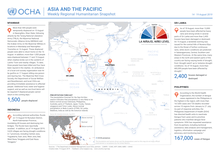