The Government of Pakistan has issued a drought alert for parts of Balochistan, Sindh, Punjab, and Gilgit Baltistan provinces. The most severely affected are the Sindh province areas of Tharparkar Umerkot, Thatta, Dadu, Sanghar and Kambar Shahdadkot, all of which have been declared “calamity-affected”. The area encompasses approximately 315 villages, but estimates of affected population are not yet available. (OCHA, 1 Oct 2018)

Upon request of the Government, the UN and other partners are carrying out a drought assessment in eight districts of Sindh province. This will be conducted under the umbrella of the National Disaster Consortium and be led by the IOM. WFP and FAO are important contributors to this activity due to their well-established field presence in the targeted districts. (WFP, 30 Sep 2018)

The Government has declared state of calamity in drought affected areas in the districts of Sukkur, Khairpur, Sanghar, Umerkot, Badin, Tharparkar, Kachho, Thatta, Jamshoro and Dadu due to less than anticipated rains during this monsoon season. Local authorities started distributing relief packages to affected families. The distribution is expected to last around three months. (Govt. of Pakistan, 12 Nov 2018)

Ongoing drought conditions are affecting some five million people in Sindh and Balochistan Provinces. Conditions have recently deteriorated in the drought affected areas with more than 70 per cent of households reported to be food insecure and malnutrition rates having increased to 30 per cent. The Government has reached 2.5 million people with food rations, nutrition services, emergency health care, and cash disbursements. Humanitarian and development partners are supporting the Government by redirecting current programs and resources to priority districts. There is an urgent need for additional food aid, access to safe drinking water, nutrition services, health care, and livelihood support. (OCHA, 21 Jan 2019)

The drought situation in Sindh and Balochistan is rapidly developing into one of the worst disasters in Pakistan. Upland Balochistan and Sindh in the south are the most heavily affected by severe drought. These affected areas of Balochistan and Sindh have been prone to water shortages, rainfall measured over the last few years has reached a record low, with minimal or sometimes no rainfall. PMD said in its alert that “severe to extreme drought-like conditions” have emerged over most of the southern parts of Pakistan due to lack of summer rain. The abrupt decline in rainfall in most of the upland areas of the province has caused a complete drying up of the surface drinking water resources and has decreased water output from springs and tube wells...On 7 February 2019, NDMA organized a Strategic Coordination Forum / Steering Committee Meeting, supported by UNOCHA with the agenda in discussing the drought response plan 2019, and the Chairman of NDMA officially requested international stakeholders to support the serious issue and drought victims, including Red Cross Red Crescent Movement. (IFRC, 21 Feb 2019)

Pakistan Red Crescent Society (PRCS) conducted a detailed needs assessment from 1-13 April 2019 to identify high risk and priority areas in Sindh and Balochistan. Owing to low precipitation, water table is going down and resulting in drying up of water sources and make it hard for community to get water for humans and animals. It also affects the sanitation and hygiene in the communities due to lack of water.This has caused the widespread malnutrition reported among women and children by FAO/WFP. (IFRC, 20 May 2019)

Around 1.79 million people (48% of the rural population) in 14 drought-affected districts (Awaran, Chagai, Dera Bugti, Gwadar, Jhal Magsi, Kacchi, Kech, Kharan, Killa Abdullah, Loralai, Nushki, Panjgur, Pishin and Washuk) are estimated to currently be in IPC Phase 3 (Crisis) and Phase 4 (Emergency). An estimated 0.42 million people are classified in IPC Phase 4 (Emergency) across the 14 drought-affected districts and require urgent action to save lives and livelihoods, whereas around 1.37 million people are in IPC Phase 3 (Crisis) and urgent action is required to protect their livelihoods and reduce food consumption gaps or deficits...The population in these districts has been experiencing drought-like conditions for the past few years, which aggravated (moderate to severe) from August to December 2018. (IPC, 18 Jul 2019)

As of July 25, 104 people have been killed as a result of the monsoon, with further heavy rain forecast in the north of the country over the coming seven days. At the same time, in the south of the country, drought conditions persist, with over 1.2 million people in Sindh province currently experiencing IPC Phase 3 (Crisis level) & 4 (Emergency level) food insecurity. The Drought Response Plan is currently 29 per cent funded at $27 million. (OCHA, 5 Aug 2019)

Pakistan has experienced an increase in the frequency and severity of drought due a rise in temperatures, adverse effects of El Nino and a decrease in rainfall during the monsoon season. As per the Pakistan Meteorological Department (PMD), severe drought-like conditions have emerged over much of southern Pakistan, with an expectation for further deterioration over the next 4 years. In 2018 Pakistan received reduced rainfall during the monsoon season (May to August), with Sindh 69.5 per cent below average, and Balochistan 45 per cent below. This has resulted in acute shortages of water, food and fodder. The Government of Pakistan estimates some 5 million people are affected by the drought in 26 districts in Sindh and Balochistan.(Gov/UNCT, 20 Aug 2019) 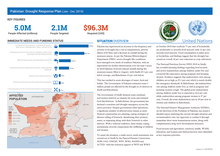 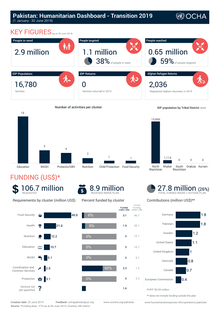 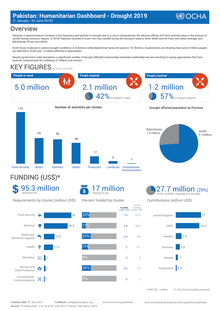 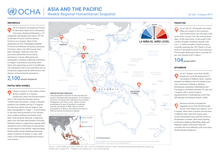