In January 2014, the Government of Kenya declared an impending drought with an estimated 1.6 million people affected. After a poor performance of the long rains between March and May 2014 in the arid and semi-arid zones, the drought situation continued to affect both pastoral and marginal agriculture livelihood zones (the North Western, Northern, North Eastern, South Eastern and parts of Coast) with an impact on households’ food availability as well as livestock productivity. The situation continued to worsen due to the increase in food prices. (IFRC, 24 Sep 2014)

Food insecurity conditions are likely to persist throughout the outlook period, especially in the northeast, northwest, and southeast pastoral areas, and coastal and southeast marginal agricultural areas. The typical recovery of rangeland and cropping conditions during the October to December period is unlikely, as the forecasted La Niña conditions are likely to lead to below-average October to December short rains. The majority of households are expected to remain Stressed (IPC Phase 2). (FEWS NET, 01 July 2016)

Deterioration of food security expected to continue even after onset of the short rains. (FEWS NET, 03 Oct 2016)

On 10 February 2017, the Government declared a national drought emergency, with 23 of 47 counties affected. The number of food insecure people more than doubled – from 1.3 million to 2.7 million. Some 357,285 children and pregnant and lactating mothers are acutely malnourished. (OCHA, 17 Feb 2017)

More than 2.6 million Kenyans were severely food insecure as of 26 May 2017 — and this number was rapidly rising. High levels of malnutrition were prevalent across the arid and semi-arid lands. Three sub-counties report Global Acute Malnutrition rates of 30 per cent, double the emergency threshold. Severe drought has dried up water resources in half of Kenya’s 47 counties and an estimated 3 million people lacked access to clean water. (OCHA, 26 May 2017)

The National Drought Management Authority’s (NDMA) early warning bulletin for June indicated that while the long rains had ended, many parts of the Arid and Semi-arid Lands (ASALs) were still experiencing long distances between home and water sources, unusually high food prices, and worrying levels of malnutrition. Insecurity linked to resource-based conflicts worsened, while Fall Armyworm and African Armyworm infestations continued to threaten crops in marginal agricultural counties, further worsening the prospects for the next harvest. (UNICEF, 19 Jun 2017)

Following at least two consecutive poor rainy seasons, Crisis (IPC Phase 3) outcomes were expected through early December in areas of Turkana, Marsabit, Mandera, Wajir, Isiolo, Garissa, Tana River, Samburu, and Laikipia, requiring urgent humanitarian assistance. However, an improvement to Stressed (IPC Phase 2) outcomes was expected across all pastoral areas in early 2018; however, some of the most vulnerable households were still likely to be in Crisis (IPC Phase 3). (FEWS, 18 Nov 2017)

Drought conditions that were expected to persist into 2018 left 3.4 million people severely food insecure and an estimated 500,000 people without access to water. An estimated 482,882 children required treatment for acute malnutrition, including 104,614 who were suffering from severe acute malnutrition (SAM). Eighty-eight per cent of these children were from 23 arid and semi-arid counties. Drought conditions led to declines in school attendance and school participation and rising dropout rates. (UNICEF, 4 Jan 2018)

Stressed (IPC Phase 2) outcomes were expected to persist through September in Wajir, parts of Marsabit, Isiolo, Turkana, Garissa, Mandera, and Tana River due to various factors, including livelihood recovery from drought and/or flooding, a livestock quarantine from an outbreak of Rift Valley Fever (RVF), and insecurity. (FEWSNET, 30 Jun 2018)

Countrywide, the historically above-average 2018 March to May long rains continued to drive food security improvements. The marginal areas were supported by available harvests and were in Minimal (IPC Phase 1). Despite significantly improved livestock productivity and above-average terms-of-trade in pastoral areas, Stressed (IPC Phase 2) outcomes were expected to persist through January 2019. (FEWSNET, 28 Sep 2018)

In marginal agricultural areas, the October to December short rains season were significantly below average and short rains crop production were expected to be 70 percent of average. However, surplus long rains production and re-planting of short rains crops by better-off households in some areas sustained high agricultural labor demand and above-average terms of trade, facilitating food access for the poor. As a result, deterioration in food security was most likely to be gradual, but Stressed (IPC Phase 2) outcomes were anticipated to be widespread in the February to May 2019 period. (FEWSNET, 14 Jan 2019)

The dry conditions and high temperatures experienced from January to March pushed more counties into the Alarm drought stage, from one (1) in February to five (5) in March. 20 ASAL counties were reporting a worsening trend and only three (3) indicated a stable trend. Counties in the Alarm drought phase are Wajir, Mandera, Garissa, Marsabit and Turkana. (GOV, 18 Apr 2019)

As of Jun 2019, the March – May long rains season officially ended and rains were expected only in the western and central parts of Kenya through the rest of June. Due to ongoing drought and a second consecutive below-average rainfall season, the Kenya Food Security Steering Group (KFSSG) estimates that 1.6 million people are currently in Crisis (IPC Phase 3) and in need of humanitarian food assistance. (FEWSNET, 28 Jun 2019

As the dry season progressed in eastern Kenya, the food insecure population was expected to continue to rise through October 2019. Crisis (IPC Phase 3) and Stressed (IPC Phase 2) outcomes were widespread. However, cumulative rainfall in the west and northwest was above average since May, which is driving relative improvements in livestock and crop production. (FEWSNET, 30 Sep 2019)

At the peak of the October to December short rains season, many poor households were gradually recovering from the impact of previous drought or recent flooding on their food and income sources. Stressed (IPC Phase 2) outcomes were present across central, southeastern, and coastal Kenya, while Crisis (IPC Phase 3) outcomes persisted in several pastoral areas. (FEWSNET, 27 Nov 2019)

In December 2019, Crisis (IPC Phase 3) and Stressed (IPC Phase 2) outcomes persisted due to ongoing recovery from the 2018/19 drought and the negative impact of recent floods and landslides on household food and income sources. From October to December, Kenya experienced one of the wettest short rains seasons on record, with rainfall totals ranging up to 400 percent of average. In pastoral areas, Crisis (IPC Phase 3) outcomes remained prevalent.

In marginal agricultural areas, above-average rainfall led to mixed effects on short rains crop production, which is most likely to result in a near-average harvest on aggregate in January. In many areas, area planted is above normal, cropping conditions remain favorable, and agricultural labor demand is at typical levels. However, excess soil moisture and flooding in some coastal and southeastern areas is expected to result in below-average, short-cycle legumes production and localized maize losses. In early 2020, the availability of the short rains harvest and labor income earned in the 2020 long rains season are expected to lead to Minimal (IPC Phase 1) outcomes in some areas. However, Stressed (IPC Phase 2) outcomes will likely be sustained in areas that are currently experiencing localized crop losses. Overall, the population experiencing Stressed (IPC Phase 2) outcomes is expected to remain atypically high through May. (FEWSNET, 29 Dec 2019)

In the marginal areas, crop production is ongoing and providing below average casual labor income opportunities. Crop conditions are good, with maize mostly at the knee-high stage with pulses and potatoes at the flowering stage. Household food stocks are dwindling, and households are mostly dependent on market food purchases and facing Stressed (IPC Phase 2) outcomes. In the pastoral areas, goat prices are above the five-year averages and supporting household food access. However, milk production is below average, and livestock have begun migrating to dry season grazing areas within the counties. This is reducing household food consumption, increasing malnutrition, and driving Stressed (IPC Phase2) outcomes. (FEWSNET, 31 Dec 2020)

According to CHIRPS satellite rainfall estimates, the March to May long rains have been significantly below average through April. Cumulative rainfall has been less than 55 to 70 percent of normal across much of Kenya. However, localized areas in western and northeastern Kenya have received 95-145 percent of normal rainfall. In the marginal agricultural areas, the poor rainfall is affecting agricultural production, with no germination being reported in parts of Kitui and Meru North. Due to declining household food stocks and below-average casual waged labor opportunities, poor marginal agricultural households are likely Stressed (IPC Phase 2). In pastoral areas, household income and food access are increasingly constrained due to atypical livestock migration, increased insecurity from resource-based conflict and terrorism, reduced milk production and consumption, reducing livestock sale values, and high staple food prices, driving Crisis (IPC Phase 3) outcomes. (FEWSNET, 30 Apr 2021)

The cumulative impact of two consecutive poor rainy seasons, coupled with the COVID-19 pandemic, insecurity, pests and diseases have caused humanitarian needs to rapidly rise in the Arid and Semi-Arad Lands (ASAL) region of Kenya, leading to the declaration of a national disaster by the President of Kenya on 8 September 2021. There are now at least 2.1 million people who are severely food insecure and adopting irreversible coping strategies to meet their minimum food needs, and this is expected to rise to nearly 2.4 million people from November 2021, according to the latest Integrated Phase Classification (IPC) analysis. This will include an estimated 368,000 people in Emergency (IPC Phase 4) and 2 million people in Crisis (IPC Phase 3), and is nearly three times (852,000) the number of people who were facing high acute food insecurity from October to December 2020. Nine counties are expected to have the highest numbers of people in IPC Phase 3 and above from November 2021 onwards: Turkana, Mandera, Lamu, Garissa, Wajir, Kwale, Kitui, Tana River and Isiolo. Food insecurity is expected to worsen in the period ahead based on the likelihood of poor rains during the upcoming short rains season (October to December). (OCHA, 30 Sep 2021)

The October to December 2021 short rains have largely failed, marking the third consecutive below-average season across pastoral and marginal agricultural areas of eastern and northern Kenya. In pastoral areas, very low pasture and water resources have driven atypical livestock migration, rapid declines in livestock health and productivity, and excess livestock deaths. The drought also follows the temporary closure of livestock markets in early 2020 due to COVID-19, which already suppressed formal livestock trade in the short-term. In marginal agricultural areas, rainfall totals have been inadequate for crop development. While the distribution of food assistance, expansion of the Hunger Safety Net Programme (HSNP), and the delivery of water and livestock feed are helping to prevent more severe food insecurity, widespread Crisis (IPC Phase 3) outcomes persist, with worst-affected households in Emergency (IPC Phase 4). With the elevated likelihood of a fourth consecutive below-average season during the March to May 2022 long rains, there is high concern that food insecurity will increase in severity and scale in 2022, and FEWS NET expects 3-4 million people will be in need of humanitarian food assistance in Kenya. Large-scale humanitarian assistance and livelihoods support are urgently required to cover current needs in northern and eastern Kenya, and assistance should be sustained throughout 2022.(FEWSNET, 20 Dec 2021)

Following a significant deterioration from the previous analysis, an estimated 3.1 million people (20% of the population in Kenya’s ASALs region) were classified in IPC Phase 3 (Crisis) or above acute food insecurity in February 2022. Compared to the same period in 2021, there was an increase from 1.4 million to 3.1 million of people classified in IPC Phase 3 (Crisis) and IPC Phase 4 (Emergency). The deterioration of food insecurity is attributed to multiple shocks, including dry spells from three consecutive poor seasonal rainfall performances (all below the five-year average), below average crop and livestock production, localized resource-based conflict, and the ripple effects of the COVID-19 pandemic, which resulted in increasing staple food prices across the country. The following seven counties were the most affected, representing more than 50% of the total population classified in IPC Phase 3 (Crisis) or above: Marsabit (50%), Turkana (40%), Baringo (35%), Wajir (35%), Mandera (35%), Samburu (35%) and Isiolo (30%). These areas are predominantly pastoral livelihoods. (IPC, 31 Mar 2022) 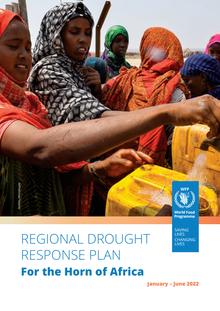 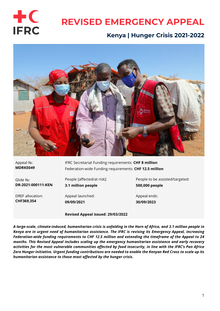 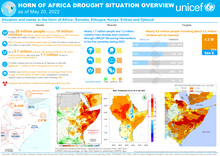 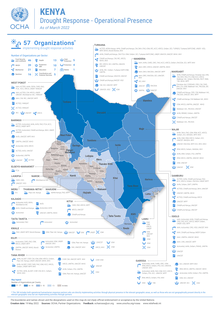 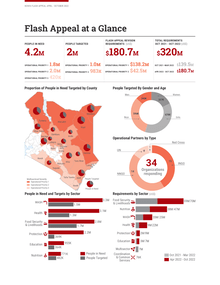