Between January and May 2013, many areas of Bolivia received insufficient amounts of rain. The drought severely affected the agricultural production, including 93,000 hectares of crops and almost 49,000 animals. More than 17,000 affected families were registered in 19 municipalities. On 19 Jun, the government declared a national emergency. (UN Country Team, 11 Jul 2013)

According to official estimates, the compounded effect of severe dry weather in March to June followed by frost in July and August, affected more than 80,000 families and 37,000 hectares of different crops and resulted in animal losses in the departments of Santa Cruz, Cochabamba, La Paz, Tarija and Chuquisaca. Cochabamba was the department with the highest concentration of households affected, estimated at 26,000. The Government was providing humanitarian assistance to the affected population including food, and agricultural inputs including seeds, feed and veterinary drugs. (FAO, 11 Oct 2013)

In February 2014, the situation of the drought-affected households in El Chaco Region and the south cone of Cochabamba continued to be fragile (FAO, 28 Feb 2014). 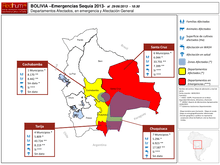