The Government declared a state of emergency for the northern Marshall Islands on 19 Apr 2013 due to a prolonged dry season and severe drought experienced in Wotje and the atolls north of Majuro. On 8 May, the state of emergency was elevated to a state of drought disaster for a period of 30 days. The severe drought conditions have damaged or destroyed agriculture on many islands of the northern atolls. In addition, deteriorating health is reported in many locations. Four clusters (Health, Food Security, Logistics and WASH) have been established and government cluster leads have prepared specific response plans with support from the UNDAC Team. (OCHA, 21 May 2013)

On 29 May, the Government issued an Intermediate Response Plan for the drought stricken northern atolls. The plan requires US$ 4.6 million for WASH, Health, Food and logistics needs for the 6,384 people affected.

As of 30 Sep, the affected populations continued to recover from drought effects as normal seasonal rainfall remained ongoing (USAID, 30 Sep 2013). 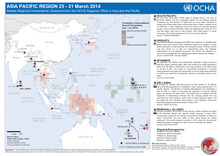 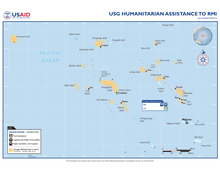 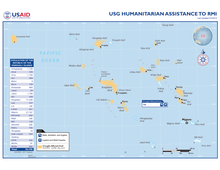