Rainfall deficits in July 2012 affected basic grain crops in numerous departments of the eastern and central regions of Guatemala, as well as in some departments of the western region. The lack of rain, combined with the presence of crop pests and diseases, led to the loss of maize and bean crops in these areas, ranging from 69 to 97 per cent, with departments in Chiquimula recording the greatest losses. (FEWS, 31 Aug 2012) By 22 Aug, almost 40,000 families were affected by the drought and the government launched an action plan to mitigate the effects (Government, 31 Aug 2012). By 18 Oct, the number of people in need of assistance was estimated at about 236,000 (WFP, 18 Oct 2012).

In 2013, rainfall deficits in the dry corridor put many communities at risk of losing up to 80 per cent of their corn crops, further increasing the already growing food insecurity caused by the previous year's drought and the reduction of rural employment by the impact of rust in coffee cultivation. In August, cases of moderate and severe acute malnutrition had increased by 36.5 per cent compared to 2012. (Oxfam, 12 Aug 2013) 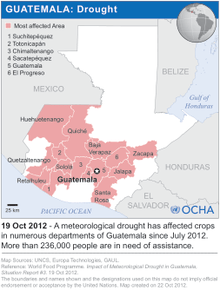