On 11 June, the Kiribati Government declared a State of Disaster due to drought. According to government sources, the entire country (some 120,000 people) has been affected - with the most critical situation to be reported on the island of Tarawa. The immediate response is to focus on 50,000 of the most affected people (about 40% of the country’s total population), including those living on South Tarawa and the outer islands. They will be provided with WASH and hygiene kits from prepositioned stocks and subsequently with further humanitarian relief supplies from warehouses in Suva, Fiji, and Brisbane, Australia. This follows an initial assistance of 100 solar distillation units for outer communities last week. The Pacific Humanitarian Team is working closely with Government counterparts and partners on the ground to further assess the situation and to provide support to the Government-led response. (OCHA, 28 Jun 2022)

The drought in Kiribati continues to worsen, with increasing challenges and threats in terms of water contamination, brackish water, water accessibility and water availability. A situation report issued by the Government highlights that humanitarian needs of concern are primarily WASH and health-related. Water assessments covering 1,875 households in Betio, the largest township of Kiribati's capital city, South Tarawa, show that the water for 73% of tested households showed levels of contaminants, indicating that the contamination of drinking water in Betio is widespread. For the outer Islands, water assessments have not yet been conducted. However, reports from the majority of Island Councils point out that accessing freshwater is becoming increasingly difficult and that the prolonged drought has already taken a toll on livelihoods and food security of communities in these islands. Response efforts by Government include the technical assessments for water quality and the provision of safe drinking water to the general population. All relevant Pacific Humanitarian Team (PHT) regional clusters are in contact with respective line ministries/governmental counterparts as well as humanitarian partners on the ground to support the government-led effort. (OCHA, 6 Jul 2022)

La Niña conditions were observed in the equatorial Pacific starting in November 2021. Since then, Kiribati, Tuvalu, Tokelau, and Nauru have experienced high water stress because of low rainfall and dry conditions. This situation is expected to persist as La Niña is predicted to continue until the last quarter of 2022. [...] In Tuvalu, two islands (Nanumea, Nui) have been declared in drought conditions, four (Nanumaga, Niutao, Nukufetu, Funafuti) are in drought warning, and three (Vaitupu, Nukulaelae, Niulakita) under drought watch (not included in beneficiary numbers). Some 9,200 people or 86% of Tuvalu’s population are under drought or drought warning conditions. The Government of Tuvalu has developed their drought response plan and have formally asked the UN for support. Their plans composed of two aspects: one is the immediate response which involves provision of reverse osmosis (RO) machines to generate fresh water in critical areas; and the other involves early anticipatory actions, including strategic deployment of RO units, conduct of household surveys and water soundings, maintenance of water storage and community wells, and WASH outreach targeting children. (UNICEF, 8 Aug 2022) 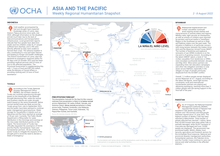 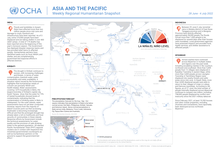 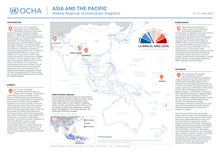