The National Weather Service (NWS) on 7 August 2015 declared the country will be experiencing a severe El Nino event, which is forecasted to continue for 8–10 months with reduced rainfall in all parts of the country. The situation is expected to be the worst since the 1997/98 drought. The National Disaster Centre (NDC) estimated that 2 million people are affected. The Provincial Disaster Center (PDC) of Chimbu Province reported 24 people confirmed dead as a result of prolonged drought in the Highlands region. (IFRC, 5 Sep 2015)

The IFRC supported the Papua New Guinea Red Cross Society (PNGRCS) through the Disaster Relief Emergency Fund (DREF) allocation, to deliver humanitarian aid to families. As a result of this DREF operation, PNGRC has built partnerships with Care International and Touching the Untouchable, a local hygiene promotion NGO and has the opportunity to develop these relationships further. The DREF operation concluded on 15 March 2016. (IFRC, 14 Jun 2016) An ongoing EU-IOM drought response, funded by European Commission's Humanitarian Aid and Civil Protection Department (ECHO), primarily centers on the supply of clean drinking water, participatory health, and hygiene (PHHE) and agricultural recovery in the severely affected areas of the Highlands.(IOM, 14 Jun 2016) 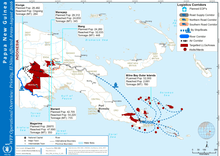 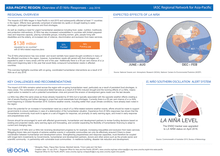 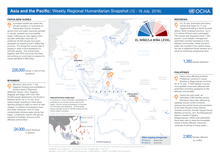