According to official estimates, the compounded effect of severe dry weather earlier in March to June followed by frost in July and August, affected more than 80,000 families and 37,000 hectares of different crops and resulted in animal losses in the departments of Santa Cruz, Cochabamba, La Paz, Tarija and Chuquisaca. Cochabamba represents the department with the highest concentration of households affected, estimated at 26,000. The Government provided humanitarian assistance to the affected population including food, and agricultural inputs including seeds, feed and veterinary drugs. (FAO, 11 Oct 2013) 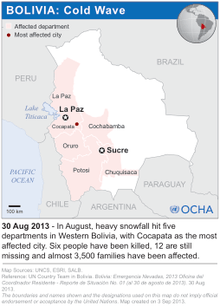