Starting in June 2012, the Peruvian Andes were affected by extreme cold weather, mostly in the departments of Puno, Cusco, Arequipa, Ayacucho, Apurimac, Huancavelica and Junin, where temperatures below freezing were registered (OCHA, 11 Jun 2012). On 22 Jun, the Government activated the National Integrated Action Plan for Managing Disaster Risk for the cold season (Government, 26 Jun 2012). By the middle of July, over 30,113 people had been affected and damage to agricultural production was reported (OCHA, 16 Jul 2012). As of 23 Jul, 152 people had been killed by pneumonia and nearly 15,000 had been affected by acute respiratory infections (El Comercio, 23 Jul 2012). 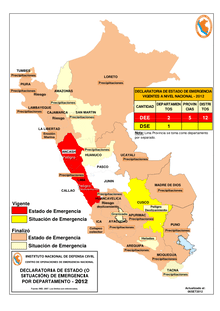 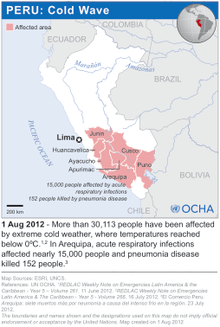 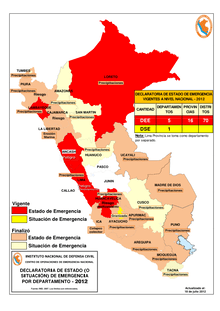