Recent visitors to the ReliefWeb mobile site might have noticed a new feature... Tucked into the top-right-hand corner, there's now a language switcher.

Click it, and you'll see two options, French and Spanish (with some more due soon). 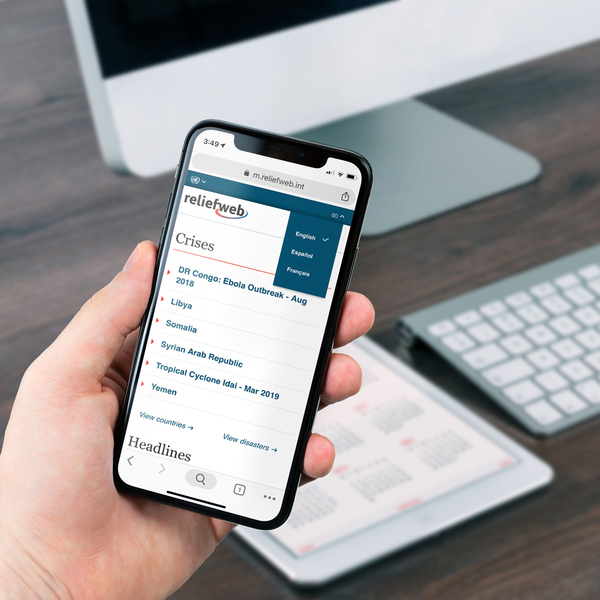 To be clear, this won't bring translated content. (Translating 650,000 reports from English into two other languages would merit a much bigger announcement - and besides, that would be up to the original content provider.) Reports, jobs and training opportunities are still shown in their original language, but the interface has been translated, which should make accessing the 10% of the content that is in French, and the 7% in Spanish, easier for those who prefer those languages.

That amount of French and Spanish content on the ReliefWeb site is nearly double the number of French- and Spanish-speaking visitors. Translating the interface is a step to making that content easier to find and to making the site more accessible for more users in the humanitarian community.

Most Spanish content is on RedHum, which is powered by the ReliefWeb API. Adding a Spanish-language interface to the mobile site makes it possible to find all that information alongside other related reports from different crises and parts of the world.

French speakers too make up a very significant part of the humanitarian community with many French-speaking countries and humanitarian organizations. Translating the interface makes it easier for the French-language content to reach its audience.

While all the ReliefWeb team members are fluent in English, many also speak French and Spanish, which helps in curating that content. Some are native speakers, which helped with making the change.

Apologies if this section gets a little bit technical, but we should point out some limitations. As noted above, the content is not translated, just the interface: the menu items, the search bar, the footer and most of the tags. Translated content on the site has been submitted by our sources, which sometimes prepare versions of the reports in multiple languages.

Disaster names are not translated, for now. One or two new disasters, on average, are added to the site each week but we have yet to implement a way for editors to update the translation strings in real time. This may be added later.

Likewise, only some organization names are translated - those with Spanish variants of their names that are used in RedHum. Translating organization names is complicated by the proliferation of acronyms as well as the official names: OCHA, for example, is OCAH in Spanish, BCAH in French. Including names for organizations as they are in different languages is on our agenda, but again, has not been implemented yet.

Another limitation of the translation is that searching for tags still only works in English. Keying in “Tchad”, for example, won't bring up countries tagged with “Chad” but the word will be present in most French-language reports relating to the country, so the effect is negligible. Searching for information about a non-francophone country, however, will bring many more results using, for example, "Japan" rather than "Japon".

This is just the first step. Translation into Russian is already under way, and we're hoping to add Arabic and Chinese versions soon. To improve the mobile site, we are already planning how to translate disaster names and source names.

We always welcome your feedback, so please do get in touch.