The region of southern and eastern Africa is experiencing its worst drought in decades, courtesy of the El Niño phenomenon, affecting 40 million people across 25 countries. The Southern Africa Development Community (SADC) in June 2016 launched an appeal for $2.4 billion to provide immediate assistance to 23 million people classified as extremely food-insecure; in the Horn of Africa, an estimated 12 million people need food assistance.

Memories of the last crisis in 2010-11 are still fresh; many lessons learned have been implemented; for example, the expansion of social safety nets in the Horn of Africa has made it easier for those affected to recover from natural disasters. Southern Africa was not quite as prepared, however, and consequently suffered extreme shocks as the drought affected harvests and the principal bread-basket, South Africa, was unable to come to the rescue.

Taking a regional approach to tackling the crisis is crucial, says Pete Manfield, head of the OCHA Regional Office for Southern and Eastern Africa (ROSEA): “Increasingly, OCHA is undertaking joint regional analysis and developing regional planning frameworks together with regional economic commissions (such as SADC and IGAD [Intergovernmental Authority for Development]) for crises that cross borders and impact on multiple countries simultaneously.

“Regional approaches are particularly important for complex crises where a sub-national analysis of multiple countries experiencing multiple shocks can produce more effective early warning and prioritisation for action and resource allocation within and between states.”

As we move into 2017, we are already encountering La Niña, with floods in Mozambique affecting 300,000 people in January and excessive rainfall likely to spread across the southern African region, possibly leading to displacement, infrastructure damage and disease.

To compound this situation, Fall Army worm cases have been reported in Zimbabwe, Malawi, and Zambia, with substantial crop damage in their wake. According to a recent report from the International Red Locust Control Organization for Central and Southern Africa, damage to crops in Zimbabwe and Zambia is significant, and in the absence of a timely response, may result in severe crop losses and overall reduction in 2016/17 production.

Meanwhile, the Horn and East Africa are still experiencing unrelenting drought, with little rainfall relief expected before mid-year. In some corners, the “famine” alarm has already been sounded.

With such widely different scenarios emerging across southern and eastern Africa, keeping up with these developments can be frustrating when the information is disseminated according to country or a specific area; thus, ReliefWeb has created a page dedicated to the regional disasters to help our users access all the relevant information pertaining to these events in one spot. 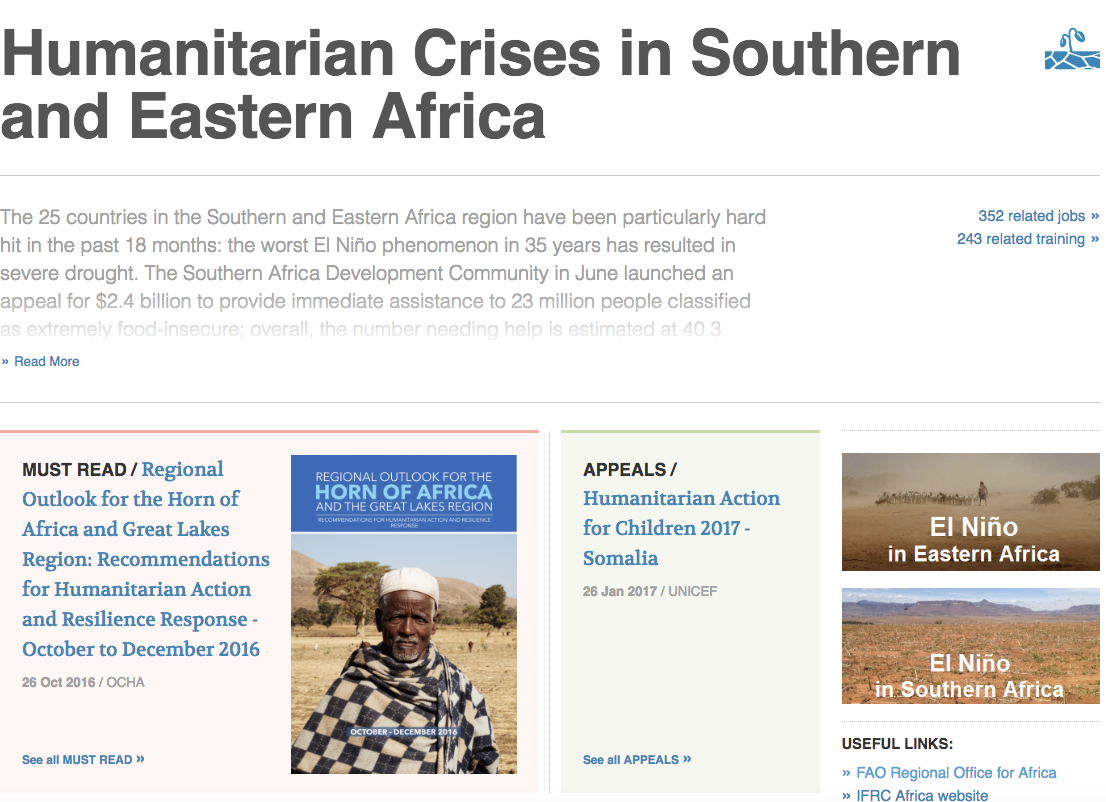 As always, we value your comments and suggestions, so please do get in touch at https://reliefweb.int/contact.